This week the film taking over the internet is a documentary film about America’s greatest and most beloved millennial pop-star, THE Britney Spears. 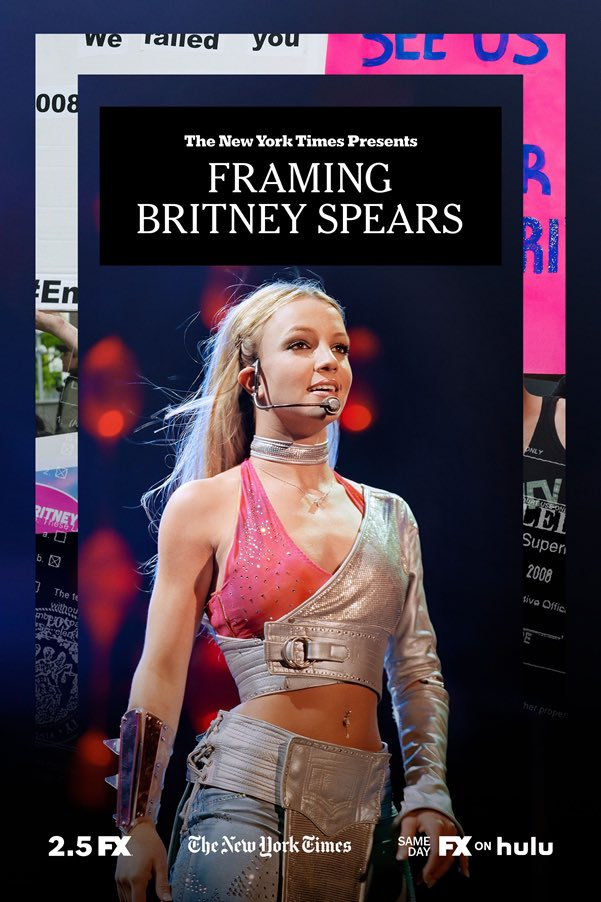 Framing Britney Spears was produced by the New York Times was story edited by Liz Day (The Weekly, Last Week Tonight with John Oliver, Frontline) and directed by Samantha Stark (The Weekly) and featured a cast of both familiar and less familiar faces who are in the life, business and fandom of Britney Spears including Paris Hilton and Daniel Ramos made famous for his photographs of Britney Spears attacking his car with her umbrella.

Framing Britney is extraordinarily compelling. The plot follows the series of events in Britney Spears’s life which ultimately led to her alleged mental illness and her entering into a legal conservatorship of both her person and her finances. The central subject matter is intriguing on its own but it also immediately presents the viewer with questions for which the answers absolutely must be learned. But that’s not all the documentary has.

What this documentary has above others of its kind (and even others of the same series) is nostalgia in spades. Old footage of interviews from the late 1990s and early 2000s that I watched happen live were interwoven into modern confessional style interviews with players in this story I had never met but had always lived behind the scenes.

At one point in a series of clips from former Britney interviews leading up to her famous “umbrella attack” I was so moved by her struggle and so attached to the footage which I remember living as a young teen that I cried for her.

Another thing the doc gives you is a villain. Or more accurately, several villains. There is nothing remotely objective about the coverage (to be expected of the New York Times) and as we relive key moments of controversy featuring Justin Timberlake, Diane Sawyer, the paparazzi, and the number one villain of them all, Britney’s dad Jaime Spears, it’s easy to feel the sparks of righteous indignation form, bubble and come to a full boil in the pit of your stomach. Nothing entertains like hatred.

The fresher cast of instagram Britney supporters leading the “Free Britney” movement are easy to like. They are compassionate and articulate and they rock a lot of pink. They challenge you with their ideas and the documentary provides just enough information for you to wonder if they’re right – that Britney is being abused – but not enough to actually prove it. Which made it all the more enjoyable, allowing me to wrap myself up in intrigue and opinion and specter.

Quite ironically my one criticism of the entertainment value is that what makes it good actually borders on exploiting the very woman it seemingly seeks to “free.” It’s sort of peep show version of investigative journalism that makes no real attempt at either objectivity or proving its subjective point of view. Hard questions aren’t really asked. Tougher subjects (like mental health, disability, addiction, child endangerment) are glanced at but never really broached. None of this necessarily took away from its entertainment value, but it did cheapen it a bit.

By the end, I’d picked a side on a controversy about the mental health and legal financial arrangement of a woman I’d never met and for whose medical condition I have no further knowledge. You will too.

Did it have artistic/Intellectual value?

The structure of the documentary is pretty straightforward and not unlike many interview style “walk down memory lane” type interviews you’ve seen many times over. It is in fact quite reminiscent to me of the Diana in Her Own Words documentary produced for UK’s Channel 4 but less interesting in that “Diana’s” entire narration was her own words from her interviews. But Framing Britney has that sort of feel and structure.

The real merit comes from the story editing in choosing which moments in Britney Spears’s storied history were the most significant and which would elicit the most personal response from the viewers. The film achieves an optimum in this way, squarely framing Britney as victim and heroine – omitting footage where Britney could be more easily cast as an unhinged or unwell individual and opting for footage where she may seem unstable but the actors around her seem the most predatory. The effect is an important element to the film’s overall quality.

However, some of the historical rewriting is a bit too obvious to let go. There is no incident in Britney Spears’ life since the age of 17 that America hasn’t know about including me. For me there were several moments in the documentary where I was thinking “well thats not the whole story” or “I don’t remember it going exactly that way.” Its important for a documentary to choose a narrative and stick with it, but you lose your viewer if there are obvious inconsistencies which the viewer would be well aware of. The doc steps away from the full context of the truth a few too many times to keep me totally enraptured.

Was it liberal propaganda?

I do not know how or why the New York Times managed to make a film about Britney’s Spears’s legal conservatorship liberal propaganda but boy did they try.

At the beginning of the film, a lot of time is spent analyzing the double standard of women in entertainment versus men and the “virgin madonna” complex which plagues so many young women entering their twenties (you must be pure but you also must be sexy). I take no issue with any of this. I take issue with the subtle inaccuracies which were kept post-edit, used to imply somehow a deeper level of misogynistic malice toward Britney Spears than other women in the industry.

At one point a woman whose relationship to the Britney story remains unclear to me says of Britney’s father that all he ever said about her was “One day my daughter will be famous and buy me a boat.” Not only do I find that claim highly dubious but I also find it to be a tool to specifically make Jaime Spears’s conservatorship over Britney a “feminist” issue instead of making it a disability rights and mental health awareness issue/public interest piece/personal Spears family issue.

Further, there are a few claims about Britney sort of pioneering this new form of sexism saying she was the first pop star to bring us the relatable, down-to-earth, girl next door who is also a sex symbol. That is incredibly untrue and in fact, the “Britney model” in business terms is almost carbon copied from the “Marilyn model.” The reason these kinds of claims are made is to suggest that in history there hasn’t been this use of “sexist conservatorship” because there hasn’t been a truly free and sexualized woman like Britney in pop culture history. Instead of the truth which is that there just isn’t a rampant misogynistic attempt to keep women in conservatorships en masse. This is a specific story about a specific woman and her family.

They also claim that this wouldn’t have happened to a male pop star – which – it actually doesn’t happen to very many pop stars at all. So to say whether or not it would happen to a male star is pretty unfair and not really a good faith argument considering we have absolutely nothing to go on to make that claim.

They also claimed that we were more obsessed with Britney because of Monica Lewinsky which as a Britney fan I can tell you is patently false and a supremely terrible argument attempting to flimsily connect Britney to politics.

Outside of the desire to make the issue of conservatorship an issue of gender, the documentary also failed to hold any mainstream media besides Diane Swayer accountable for their actions in sexualizing, villainizing and destroying the well-being of Britney Spears. Consistently they reference the “tabloids” but show clips of late-night prime time news anchors referencing those tabloids. Do they hold no responsibility for spreading idle gossip? Do they have no accountability for the questions they asked and let them hang unanswered in the minds of their viewers? I think they do. And I think the documentary pointed fingers at every single other person but themselves and their allies.

Overall the subject matter and the emotional walk down memory lane make this documentary an educational and intriguing watch that will spark lively debate amongst your friends and family on whether or not a judge should “#freebritney.”

Malcolm and Marie: Was It Liberal Propaganda?