Who Is This Gold Medalist And Patriot? – Free Press Fail

Who Is This Gold Medalist And Patriot?
Advertisement When I saw Ryan Crouser’s victorious photo I had to learn more about this patriot and gold medal winner.

Crouser is the world’s best shot-putter, taking home Gold in the men’s category at the Tokyo Olympics and also in 2016 in Rio.

Crouser trained in his Grandfather’s backyard as a young man where he recounts the time he hurled the shot-put through the roof of the garden shed and had to come back and replace it the next day.

Crouser was extremely close to his grandfather who lost his hearing in the final days of his life and with whom Crouser exchanged notes to communicate. His grandpa last saw him compete on June 18, 2021 to break the 31-years held world record at Olympic trials. He passed away shortly after and wasn’t able to see Crouser at the Olympics. To honor his grandpa, Crouser held up a note saying “Grandpa, we did it, 2020 Olympic champion!”

A family man from Redmond, Oregon, Crouser’s coach is his father, Mitch who handed a tearful Ryan his sign (pre-written for luck) and his cowboy hat as he took home victory. 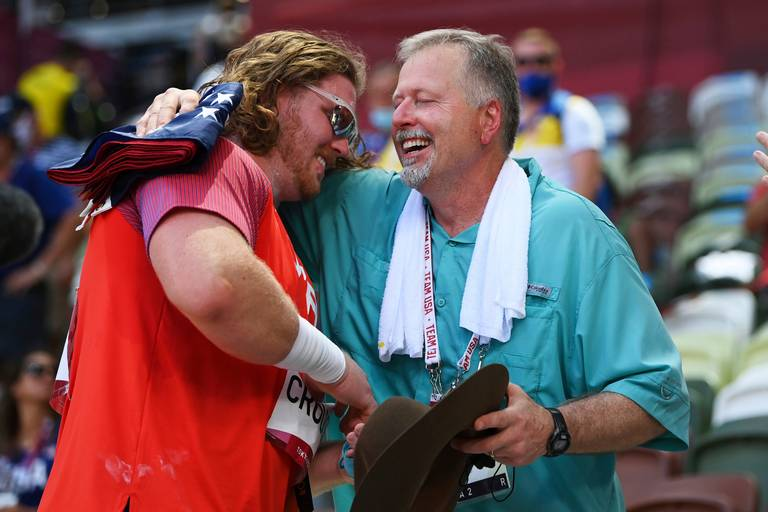 Even without his grandpa, Crouser has his whole family rooting for him back home including his mom,  cousin, little brother and grandma.

Thank you Ryan Crouser for representing the United States as a true patriot and family man!

Why Are The Olympics So Weird At The End?