Its here! Today is April 25, 2021 which is the big day in film: The Academy Awards. All season The Conservative Critic has been reviewing the Best Picture contenders (you can check out my reviews at the Conservative Critic page of Free Press Fail) and now is the time to make my predictions but its also time to make YOUR predictions (see end of this article for a form).

Shoot them to me @Jennifer_Zilla on Twitter for a special shout out from me and FPF’s own Corinne Clark @corinnec on Twitter if you guess the most right!

My prediction list is not comprehensive because lets face it: some of the categories are less interesting to we bystanders than others. But here’s what I think is going to happen versus what I WISH would happen for the good categories:

Best Actor in a Leading Role

A strong and worthy performance from the late Boseman which is certain to win to honor his passing.

Putting aside honoring the life of Boseman, Ahmed’s performance was the strongest of the season and I wish he could win it.

Best Actor in a Supporting Role

A convincing and charming performance about a controversial Black Panther leader.

It really was an extremely well performed role and he does deserve the win even with the controversial material.

Best Actress in a Leading Role

I didn’t love this role but I know the Academy will because the beautiful Viola Davis had the “courage” to look ugly and sweaty and kiss a lady.

Her performance was actually a complete trainwreck of overacting drivel except the one moment where she sang Strange Fruit which was so powerful I had to actually pause the movie and take a break from watching. That moment alone should win her the award.

Best Actress in a Supporting Role

A moving performance worthy of nomination and recognition.

An extremely convincing and effervescent performance which deserves the win.

This movie is creepy, pretentious, pessimistic and poorly thought. I hated it. I disagree with all the critics. Its absolutely the worst. It will definitely win because its an atheists take on the afterlife which is Hollywood’s fave.

Well written and full of humor and heart, this is the animated film from Disney/Pixar which SHOULD win.

A breathtaking and originally crafted film capturing the beauty of the rugged American west.

Its stunning, original and should be awarded for its beauty.

The Academy is required to award the Government of China at least one gold statue per year. Also to be fair the costumes were cool.

Tongue and cheek period pieces with a playful color pallet – I died. Fashion.

Chloe Zhao innovated film by integrating real nomads into her beautifully shot true story. No question she deserves to win

This was an extremely difficult prediction. Based on the liberal issue de jour at the time of voting (fake Asian hate) and the actually quality of the film I think Nomadland will take it.

Despite the potentially political motives behind the Academy choice the film actually was the best of the year and does deserve the award. It was an incredibly competitive field but Chole Zhao brought something new to the table and it was my favorite of the season.

Worst film of the season who might sweep and I can’t bring myself to predict it because I fear it so much: MANK

Mank was absolutely terrible and I hated it so much that if it wins a single category I will metaphorically burn this place to the ground. But be forewarned that it really might sweep everything because Hollywood is terrible. I just couldn’t bring myself to even predict such horror. We can only hope that because Hollywood is so hopped up on fake racism right now that a story about all white people can’t possibly take the wins. I hope that their identity politics actually help for once. 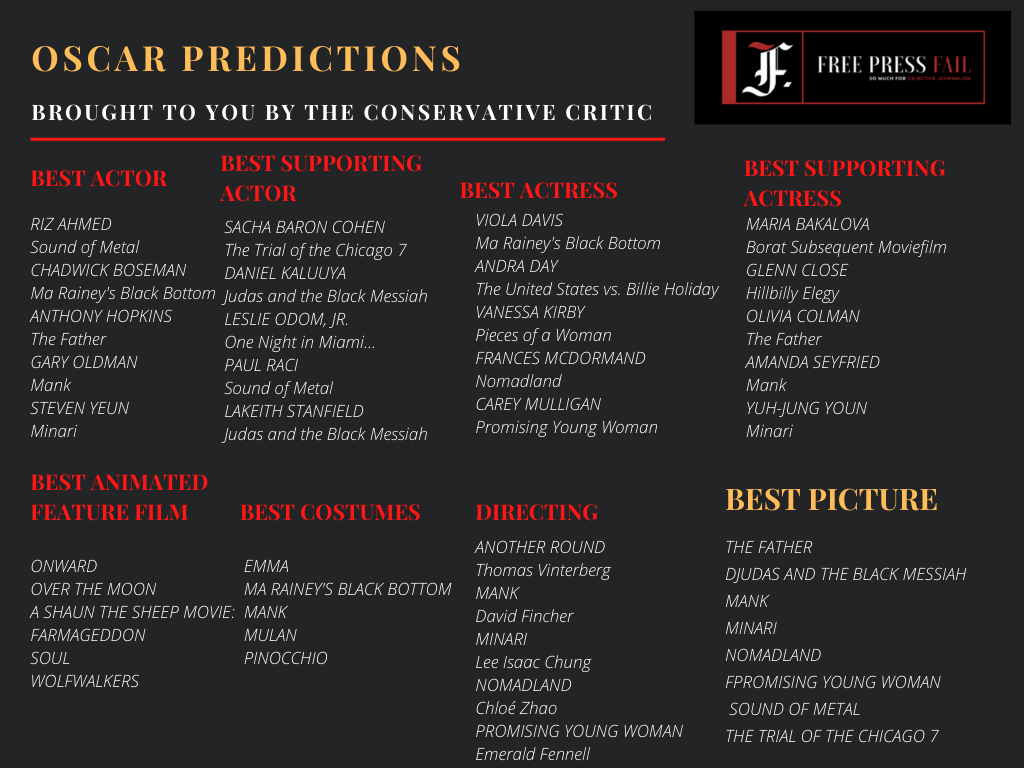